What type of school are you?

We are a one and a half form entry primary school in Knutsford, Cheshire. Knutsford is generally considered a fairly affluent area but our school feeds from the Longridge Estate, an area of significant deprivation. Alongside our primary provision we also have nursery provision for both 2 and 3 year olds. Due to the area we serve, we currently have 47% FSM, 55% PP and around 20% SEN which is very indicative of our demographic.

As a school, we are actually fortunate with the quantity of outdoor space we have. We have an average sized playground attached to a large field and alongside a significant area of woodland  which belongs to the school and is accessible from the playground. However the drainage on the field means that for considerable parts of the year the field is waterlogged and out of use.  Within the last 2 years we have enhanced our outside provision with the construction of a MUGA, designed to make more play space available when the field was inaccessible. We also have an allotment which was generally closed to the children and a designated quiet zone on the playground. On the field there is a trim trail which has also been installed in the last few years. Again however, due to it’s location, it has only been available when the field has been in use.

What did the play offer look like before OPAL?

Prior to Opal commencing play was very different at Manor Park. For the majority of the year the children were on the playground together. The field would be accessible for small parts of the summer and early autumn term, but this was weather dependent. In later years, the MUGA was timetabled at break and lunchtime for different year groups. The children had access to some generalised play equipment including balls and a small number of skipping ropes, but equipment was often lost. A large proportion of the playground was taken over by football which was only played by a relatively small number of children. The other children utilised the rest of the playground but often had little equipment to occupy them. A small number of children used the quiet area where they would read or play with provided construction equipment. Midday Assistants generally were found defusing conflict situations, stopping children taking part in certain activities (eg rolling down the hill, when the field was in use) or dealing with First Aid incidents. Although they had all received First Aid training, they hadn’t accessed any training to support play.

If playtime was wet – the children stayed in!

What behavioural issues were there?

Due to a robust behaviour policy, there are no concerns about overall behaviour in school. However, at lot of time was spent resolving conflict and issues between friendship groups. The main focus for a large number of boys was football which caused it’s own concerns with fall outs often spilling over into afternoon teaching time. There was a considerable amount of First Aid and SLT were always available to provide additional support when needed.

How has OPAL improved the equality of your play offer across gender, age and ability

The introduction of OPAL has provided so many different opportunities for all children, regardless of gender. Football still takes place but there are now so many other opportunities, it doesn’t dominate the playground. There is so much more opportunity to be involved in imaginative play opportunities and it has been amazing to watch the different risks the children are prepared to take. The introduction of tyres and dressing up facilities have been popular with all children and it’s fascinating to see the different ways they interact with the equipment. The children have responded with real enthusiasm to the different opportunities now available and lunchtime has become an enrichment environment for all. What’s really fascinating is observing how much more imaginative and creative some of our older children have become. I think that has been one of the biggest surprises.

The enhanced use of the quiet zone and the opening up of the allotment as an alternative quiet space has provided the safe havens needed by some of our SEN children. An additional benefit has been the use of heavy equipment (eg tyres) has fulfilled some of the different sensory needs experienced by some of our children.

What difference has OPAL made to the quality of play?

It has revolutionised playtime. All areas have been opened up and children are now in control of where they play as the Spinney and field are now readily available. All children have wellingtons which enables them to access all areas.

Due to allowing them to make their own choices it’s been amazing to see them rolling down the bank, building dens, creating vehicles out of crates and problem solving. Their decision making skills are now so much more enhanced and it’s particularly encouraged their resilience when things haven’t always worked out. There is more co-operation between children of different year groups and many children are becoming adapt at finding their own solutions to problems. Due to the  variety of stimulating opportunities for creative play, there has been a significant reduction in almost all incidents of inappropriate behaviour.

What difference has OPAL made to senior leadership?

Play has become an integral part of our school development plan which outlines our equipment to ensure that Play is as important part of the curriculum as other core subjects.

It’s so rewarding to watch lunchtime at work with happy engaged children who are thriving in a stimulating environment. Due to the nature of the playground there have been significantly less incidents to deal with which has enabled us to spend more time discussing the benefits of play with the children rather than engaging in negative conversations regarding behaviour.

What difference has OPAL made to your lunchtime staff?

They are more engaged and positive about the lunchtime experience. There is more of a harmonious atmosphere on the playground and the change of name to Play Leader and their involvement in the training – particularly the risk management has really helped elevate their status in school. This in turn has improved their positivity and helped them see themselves as an integral part of the lunch hour.

What other impacts has OPAL made?

Less issues at the end of lunchtime has equated to fewer minutes of lost learning time sorting them out. The children are generally more active at lunchtime which in turn has a positive affect on their mental health. They are also generally more ready for afternoon learning because their lunchtime has been so busy. The inclusive nature of the OPAL programme really shines through. Everything is available to everyone and this has really benefitted all children.

What advice would you give to a school thinking of enrolling on the OPAL Primary Programme?

Don’t think about it. Just do it!! Using the programme has given us a clear structure to help us transform the play experiences for our children. We are still on our journey, but can already identify the benefits to the whole school community. The children’s use of the space available is significantly enhanced and the skills developed surpass anything which can just be learnt in the classroom. They have become confident risk takers, problem solvers and creative beings and everyday is a new opportunity for amazing play opportunities and the programme has really helped shift the outlook of all stakeholders regarding the value of play in the lives of our children.

We can’t wait to develop our environment further over the summer period and creating an even wider range of experiences for our children. 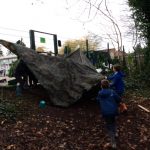